Today I learnt that my expectations of Chinese New Year were so high and in reality it’s been pretty shit. However, today I met a bunch of people from 15 different countries.

I’ve felt so lonely over these past couple of 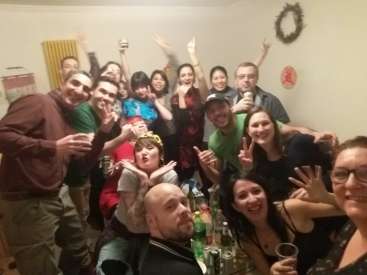 weeks (the word lonely is probably getting boring now considering I keep saying it so much), I haven’t seen Jack and Amanda in so long. With all 3 of us working at the same time now, we just haven’t met up and I miss them I really do. I’ve had so many belly-aching moments with Amanda. After the ‘free alcohol for women’ night I thought “Hey, it’s really not that hard to chat to strangers!” I think I still beat myself up for being an unpopular girl at school who would say anything and everything just to get the popular group to like me. My subconscious definitely whispers “they can see right through you, you’re lame and embarrassing you always have been.”

On WeChat there is a group that has over 300 women in it for connections, advice and general chit chat. From that group there are also lots of subgroups for different things like ‘Staying in Beijing for Chinese New Year’. I had a great night speaking to the women at Beersmith and so I hunted for some courage to admit in the chat that I was lonely and wanted company. With CNY coming up Amelia and Gary from work were about to head off on their holibobs and so were Amanda and Jack, so I was going to be really lonely. The CNY in Beijing subgroup chat took me in with welcome arms and the plans began unfolding.

Today was the first official day of the CNY holiday and there are a handful of temples that are hosting festivals for the week which I really wanted to visit. After being so fucking gutted that fireworks were banned within the 5th ring of Beijing (apparently it used to go on for hours and sounded like a warzone) I had hope that these temples expose me to some real Chinese culture. I expected people dressed as fuck off big dragons dancing through the temples, blissful chinese music playing on instruments, flawless women dressed in beautiful authentic garments etc. etc. I was going to go on my own – even though I always feel lonely, sometimes I don’t help myself because I think that I like being alone. I scalded myself, bit the bullet (only because I overthink meeting new people) and invited anyone who was free to join me in going to Shijingshan Temple Festival. I felt like a boss-bitch doing research, organising times and places to meet for the 4 other foreigners who expected fuck off huge dragons too.

Hanna from Ethiopia/USA, Jaso from Liberia, Angel (with an accent pronunciation) from Spain, Silvio from Belgium and I headed on our 1 hour commute to Shijingshan Temple Festival in the amusement park. Shijingshan Amusement Park or a knock-off Disneyland, and not the Banksy type where it’s dreadful to enforce a political message it’s like full on shit. A mockup of the London Bridge sits at the entrance and leads you to a smaller, faded version of the Disney Castle with a statue of Cinderella in the courtyard. Jaso’s face lit up when we saw classic amusement park games where you win cuddly toys and darted straight for the coin purchase booth. He won, obviously and was super chuffed with his grey swirly teddy bear. Food stalls upon food stalls bordered the park and polluted the air with a variety of different cuisines and lead the nose astray… until we saw that one stick of chicken meat was 25rmb, hell fucking no. It was terrible but it was the catalyst for meeting 4 lovely, funny and interesting people who I’m definitely going to meet with again.

It’s traditional to make and eat dumplings during CNY and Laura, a chinese woman in the Expat chat, wanted to share her culture with us by inviting us to have a Dumpling Party. Another subchat from the subchat was formed and I had plans for this evening. 20 of us confirmed our attendance, most of which had never met properly before but super ready to bond over dumplings and wine. Mandy hosted us in her (very) cosy (and by cosy I mean fucking boiling) apartment at the end of line 15 and Laura provided the prep for the dumpling making. It came as no surprise that I’d be shit at making dumplings because the most extravagant thing I’ve made in the kitchen is a cheesy omelette. 200 dumplings were made, devoured and washed down with lots of red wine. As the wine flowed the levels of our voices grew… if only growed was the correct grammar in this sentence I’d be a witty genius. By the end of the night most of us had shouted ourselves into sore throats after asking 21 cliche expat questions so we turned the level down a notch as we danced to Justin Bieber’s version of Despacito accompanied by Paola, from Mexico, who actually knows the lyrics.

The night ended with 4 of us running up and down a subway train because it was empty and that’s a rarity in Beijing.

Y’know that Simpsons episode where Mr. Burns is glowing because he’s full of radiation? Well, that’s how I feel right now. There were only 13 hours in my day today and that is not long enough to hear all about 15 different countries, cultures and backgrounds. I am so looking forward to meeting this fab group of people again whether it be all together, or with a couple of people over coffee. I finally feel like I am embracing expat life.

p.s here is a list of the all the countries this fab bunch are from: Belgium, Brazil, Canada, China, Croatia, Ethiopia, France, Germany, Liberia, Mexico, Spain, South Africa, Turkey.

Jodie and Tian go to Seoul