So Sunday was a good day. I took the time to get up early and venture to the 798 Art 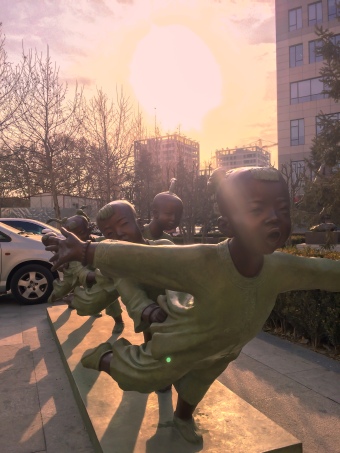 District in the East of Beijing. I wandered around mindfully stopping to gaze at each inch of the statue features that are scattered around the district. I felt like a cultured contemporary artist lover but I probably looked like a pretentious white foreigner. I spent five hours there, stopped for coffee and lunch and again, I saw some incredibly lush looking guys that sent a red flush across my face. I really wish it didn’t do that, it makes me look so lame. Asian women here are super cute and hot at the same time – I’d rather be like that, with perfect skin, big eyes and an adorable smile that makes them more appealing when blushing or flirting. Instead I’m a 5”9 white as white woman with blotchy skin, shit hair and a terrible habit for biting my fingernails on my elephant textured hands.

I like those days where you go with the flow riding the metaphorical wave of adventure and happenings by just saying yes. Eventually that yes invited you to do tequila shots, pulls you by the hand to an underground gar bar in China and, encourages to dance in between two topless gat foriegn men. That was Monday – on Tuesday I died. Either I died or was absolutely steaming. Amanda definitely died.

I have never been an actual believer of Karma, I just use the term as a figure of speech y’know. However, Karma grabbed me by the shoulder this week and then punched me in the fucking throat.

Each journey to the subway station I pass a street market to my right, I took a wrong turning once and walked the whole street. A variety of different stalls litter the road – tables piled with different fruits, seeds, nuts, clothes and of course, that random knick-knack stall with shit no one needs. One thing about every stall is the same though… each owner is wrapped in several puffy layer with a blanket close by and wind bitten faces. The underpass near the station is home to hundreds of Mobikes and a couple of little carts. One of these cart is a not a cart, more of a metal cage at the back of a bike. It’s a rustic orange colour, looks old and has two levels inside. At the bottom stand 3 or 4 chickens bustling around unaware of their surroundings. At the top several medium sized pigeons standing patiently with wide eyes watching the world go by. On a shelf outside of the cage is a set of food scales and next to that a big pot surrounded by loose feathers of white, grey and brown. Steam dances out of the pot foreshadowing the everpending death lingering in air. I’ve passed the cart about 7 times now and have kept my focus ahead trying not to look, but one hourney the cart was clearly in my vision.

The guy reached into the bottom level and lucky dipped a chicken by the neck and freed it from it’s cage for all of 10 seconds. He broke its wings and laid it on the scales. Tears clouded my eyes and spilled onto my cheeks and under my smog mask as the animal swkarked and squealed.

I sobbed to myself for 3 stops on the subway. I knew coming to a culturally different and diverse country would challenge me but expecting it does not soften the blow.

In my hungover state the day before I had consciously ordered a McSpicy chicken burger (still being new to meat eating), and THAT is my fucking karma.

Jodie and Tian go to Seoul